The Cortex A7 is still king in powerful wearable SoCs today: Snapdragon 400, Exynos 3250 and MediaTek MT2601.
These are still capable enough to run a full Android or equivalent smartwatch OS, but do not compromise on heat-up and empty the small batteries they're coupled with.

+ARM just announced the highly successful Cortex-A7 successor, the ARMv8 64-bit Cortex-A35.
It's described at being better at everything than the A7 and also configurable.
SoC vendors will be able to choose which or customize the blocks included without resorting to build their own CPU: something very convenient to scale it from IoT devices choosing it instead of micro-controllers to full-fledged smartphones.

We will probably see it as small core in big.LITTLE configuration as well, since the A53 has not been as convincing as hoped. 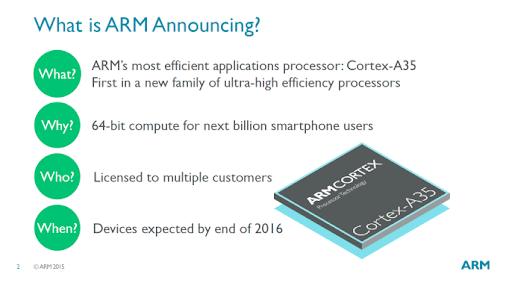