I walked around in Chambéry with two cameras, so that happened.
The 6P HDR+ works better in low light to extend dynamic range, and it's also performing great to extend the dynamic range in order to preserve skys.

While the 6P camera preforms rather poorly in great lighting due to suboptimal automatic settings and below average color rendition, it becomes an excellent performer in low-light.
The new HDR+ computational photography algorithms working with the large 1/2.3" sensor equipped with f/2.0 aperture lens is a worthy alternative to OIS in stills .. at least compared to the Nexus 5, which you can see is still capable of perfectly usable shots in most situations.

The 6P camera is an absolute killer for selfies however. HDR+ on this one makes wonder to expose the face and everything else in the worst conditions.
The focus distance is close enough to keep your face sharp and get some background blur. Even in low light, the amount of detail preserved is high: enough to show your skin texture, which is fine in some case, unflattering in others (in good lighting) where the sharpening will highlight skin imperfections instead.

I made this album because it also demonstrates that if color profiling accuracy is crucial for great outdoor shots: our eyes and brain are highly trained to recognize subtle color tones found in nature it is not as much if at all in artificial lighting. That's part of why the Nexus 6P camera can be an excellent performer in these situation despite it essentially sucks in sunny outdoor natural conditions.

Notes:
– As you can notice, the field of view of the Nexus 6P is larger than the Nexus 5. It's pretty convenient for architecture and landscape, less suited to shoot people.
– Both Nexus 6P and 5 bokeh circles are not very good.
– I had to delete roughly 1/3 of out of focus shots from the Nexus 6P. It misses is just a bit quite often in low light, leaving you with a good looking but a bit blurry picture. Make sure to review and shoot again.
– Unless specified, the exposure is in full auto (and sometimes not what I would choose manually)
– The Nexus 6P is lacking exposure compensation entirely, while it is available even on HDR+ on the Nexus 5.

S6 32GB is sold a bit cheaper than the 5X 16GB in France.
Pretty good analysis by +SuperSaf TV, nothing to add: just watch 🙂

The best solution currently might be to carry both in your pockets!

But still an interesting video from +SuperSaf TV!
The +Sony Xperia Z5 does a good job at stabilization, especially in 1080p video.
It's a shame that 4K video recording doesn't benefit from the same stabilization quality, although there's still some.
As it's digital stabilization only however, you'll often see some artifacts coming from the motion blur due to movement in frames.

The Z5 also does a good job at stabilizing the front facing camera although it's at the expense of some artifacts and crop, is there no such capability on the Galaxy S6?

Galaxy S6 front and back lens are very good at dealing with flare, which is not the case with the Z5.

The Z5 color profile and automatic white balance is colder, as usual with +Sony products.

Galaxy S6 appears to be more reliable and consistent overall than the Z5, which can sometimes get the automatic white balance all wrong like at 4:57 (it gets a nuance of green as white reference, hence the whole scene turning into almost greyscale)

The images are very well chosen and their variety give a pretty great idea of the image codecs performance in practice.
Spoiler: BPG entirely hammers everything else available today, including WebP.

One thing tho:
WebP, if I understand correctly is still based on VP8 and its keyframe image encoding is not that impressive as you can see on Daala comparison here:
http://people.xiph.org/~xiphmont/demo/daala/update1-tool2b.shtml

Thing is, this second comparison tend to show that VP9 keyframes image codec performs admirably, and looks to me at least as good or better than x265.

Now I think that now I want a new WebP based on VP9. It'll be best in class in terms of image quality and not patent-encumbered patents.
Sounds good, right?
Can someone at Google please upgrade WebP? 🙂


BPG Image Comparison
Medium images were first encoded with bpgenc at 19 CRF filesizes. Medium is 60% of Large. Small is 60% of Medium. Tiny is 60% of Small. Everything else was matched to +/- 5% filesize. BPG, JPEG 2000, and WebP decoded in javascript when needed. This page is based on Xiph.org’s Daala comparison …

That's a lot of work!

Note: I only look at the pics and skip all the text as I'm experienced enough to analyze on my own. I don't know if I agree with their writing or ratings.

I find interesting to see that color rendering deviates a lot less from one smartphone camera to another than displays colors do.

If today's mobile display color accuracy is in pretty bad shape, and not making any progress, at least the cameras are pretty consistent and perform impressively in average all things considered!

Thanks +PhoneArena for all this useful data 🙂 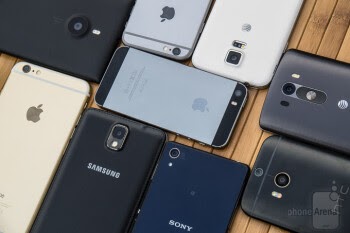 Camera comparison: iPhone 6 and iPhone 6 Plus vs iPhone 5s, Galaxy S5, LG G3, Lumia 1520, Xperia Z2, HTC One (M8)
Apple has been treating its iPhone to camera upgrades with each consecutive generation. However, the company has never been into the megapixel race – as the iPhone 5s and the iPhone 5 before them, the iPhone 6 and iPhone 6 Plus sport 8-megapixel main cameras. Will this be enough for the new iPhones to beat or match the performance of other flagship phones? Well, we’re about to answer this question in our latest camera comparison…